In my quest to discover what the tell-tale signs were to distinguish older Chinese cloisonné beads from newer products, one of the motifs I noticed that changed with the decades was the little wire cloud used to stabilize the background enamel (the JingFa Cloud).  Another is the construction method for plum or cherry blossom buds. 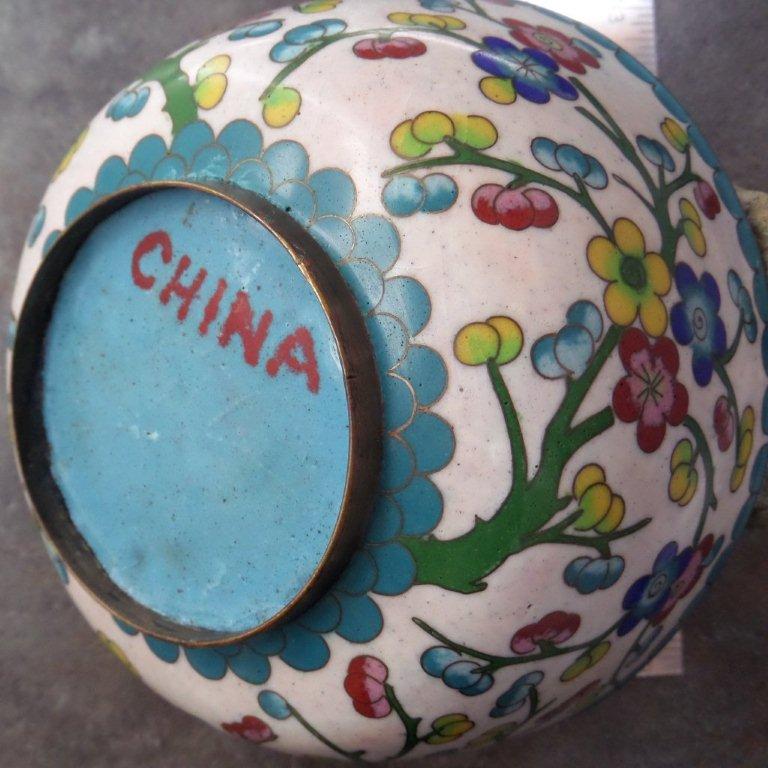 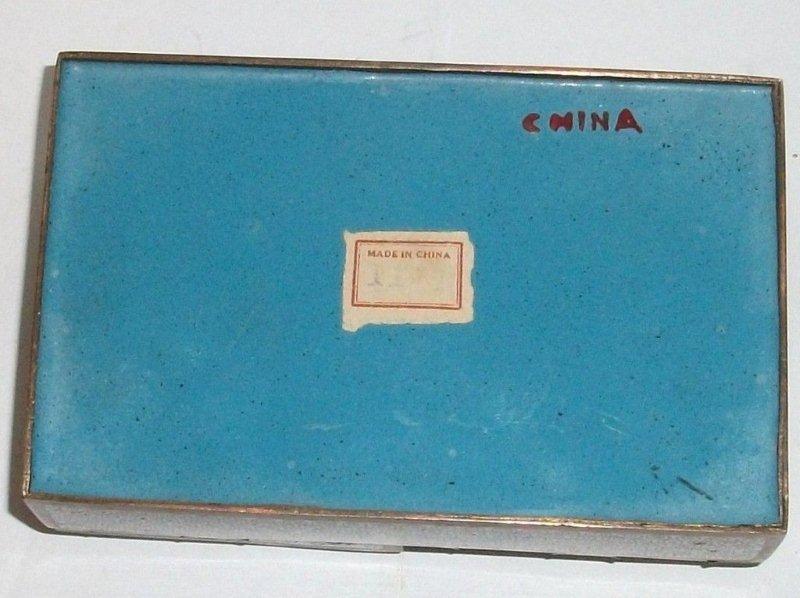 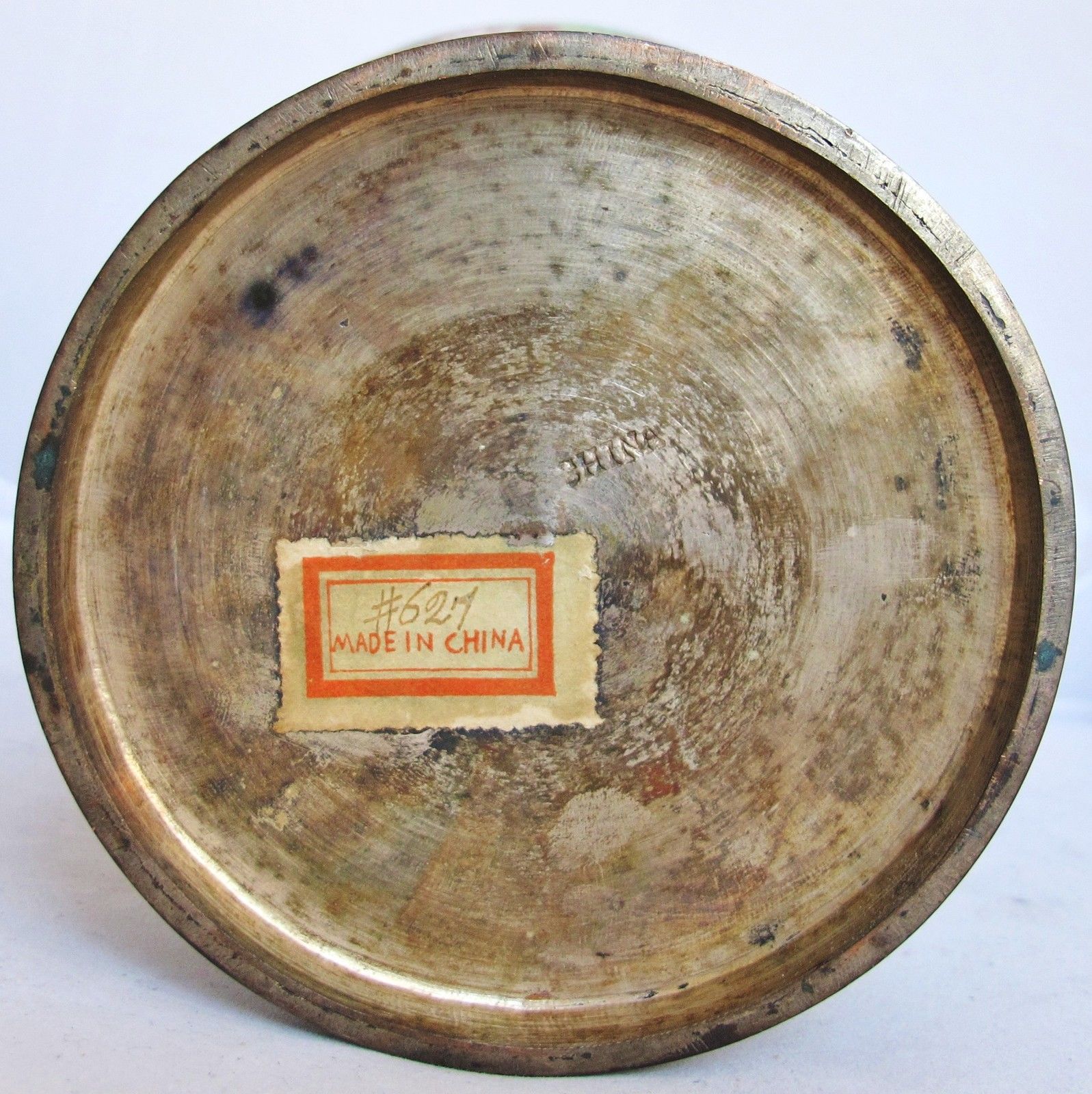 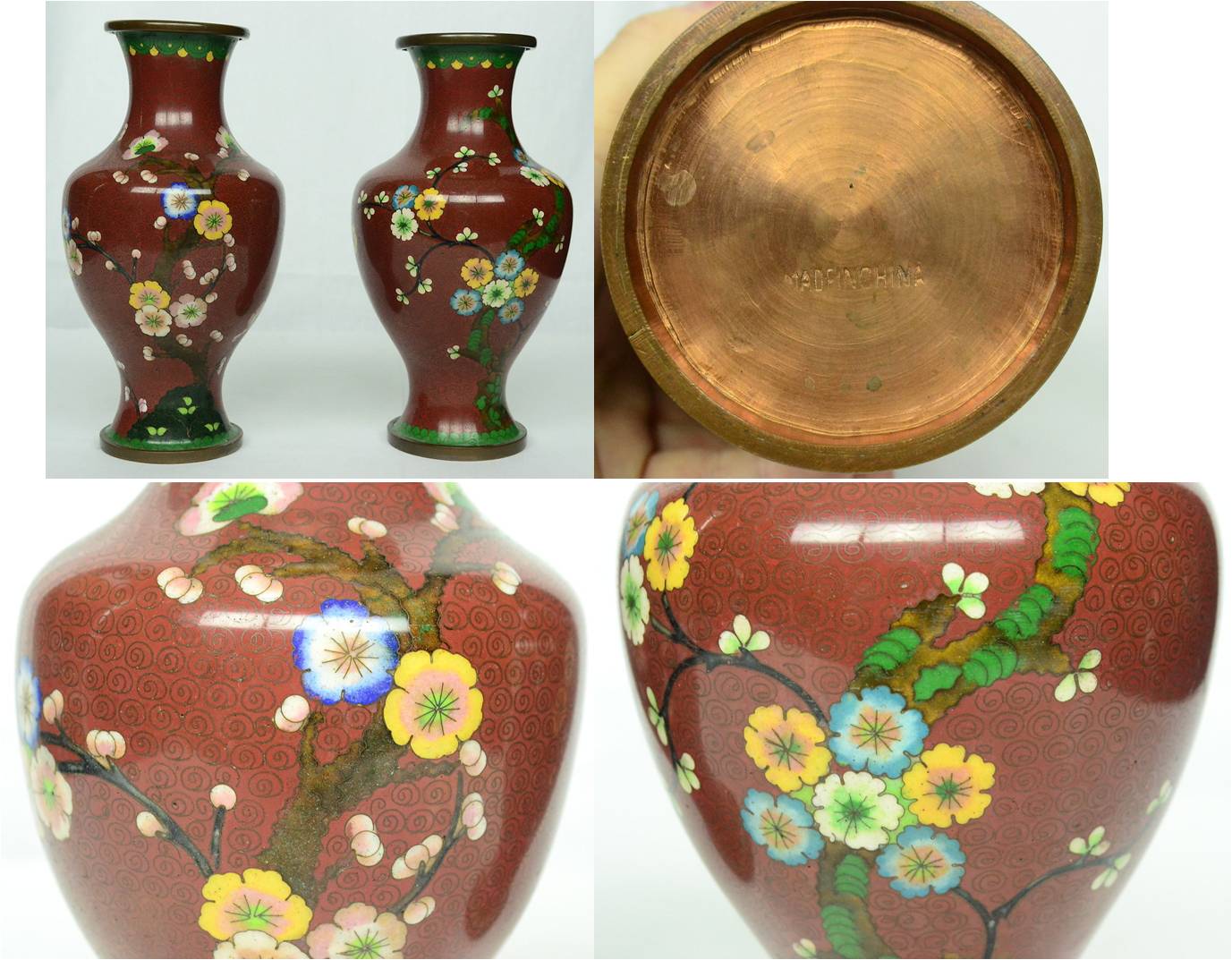 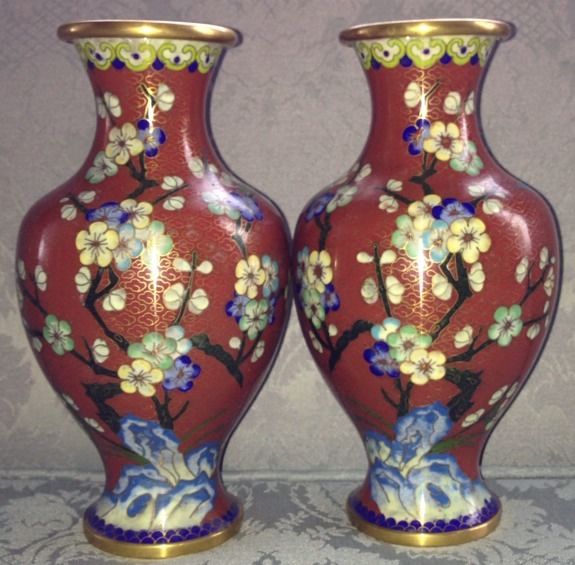 A nice set of beads featuring buds made by the 3-loop method, various clouds and spirals, and a Lotus Clasp. 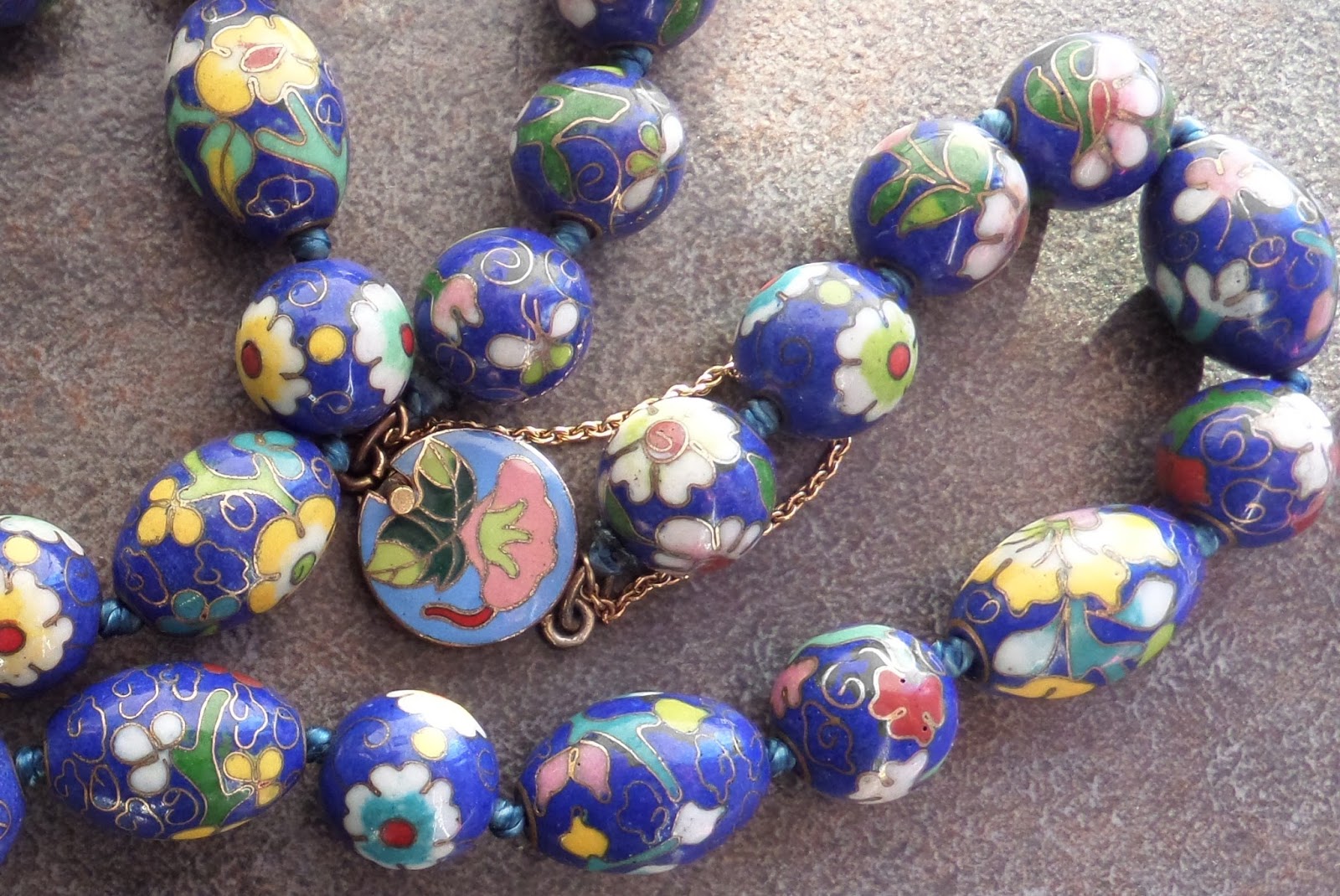 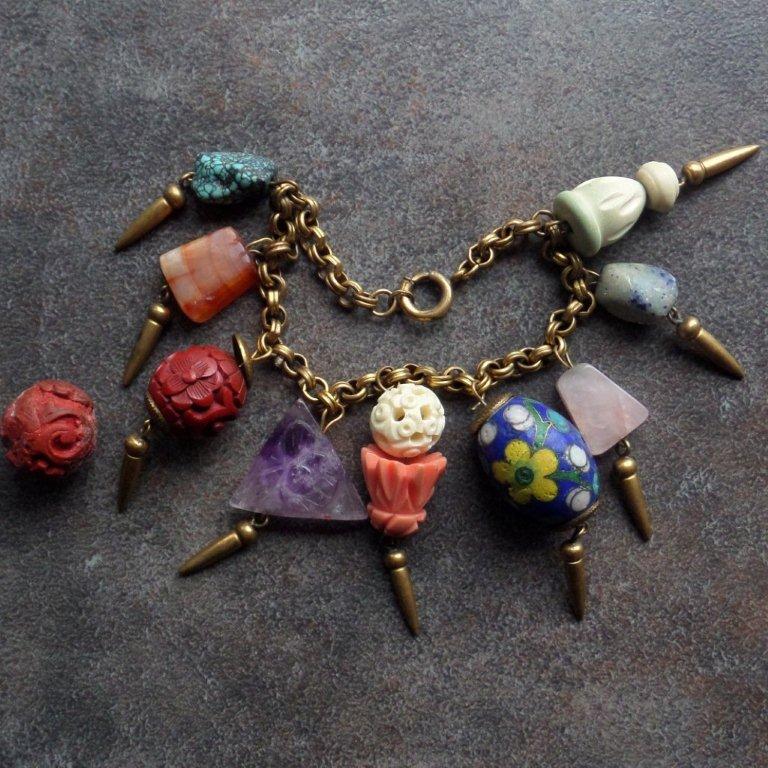 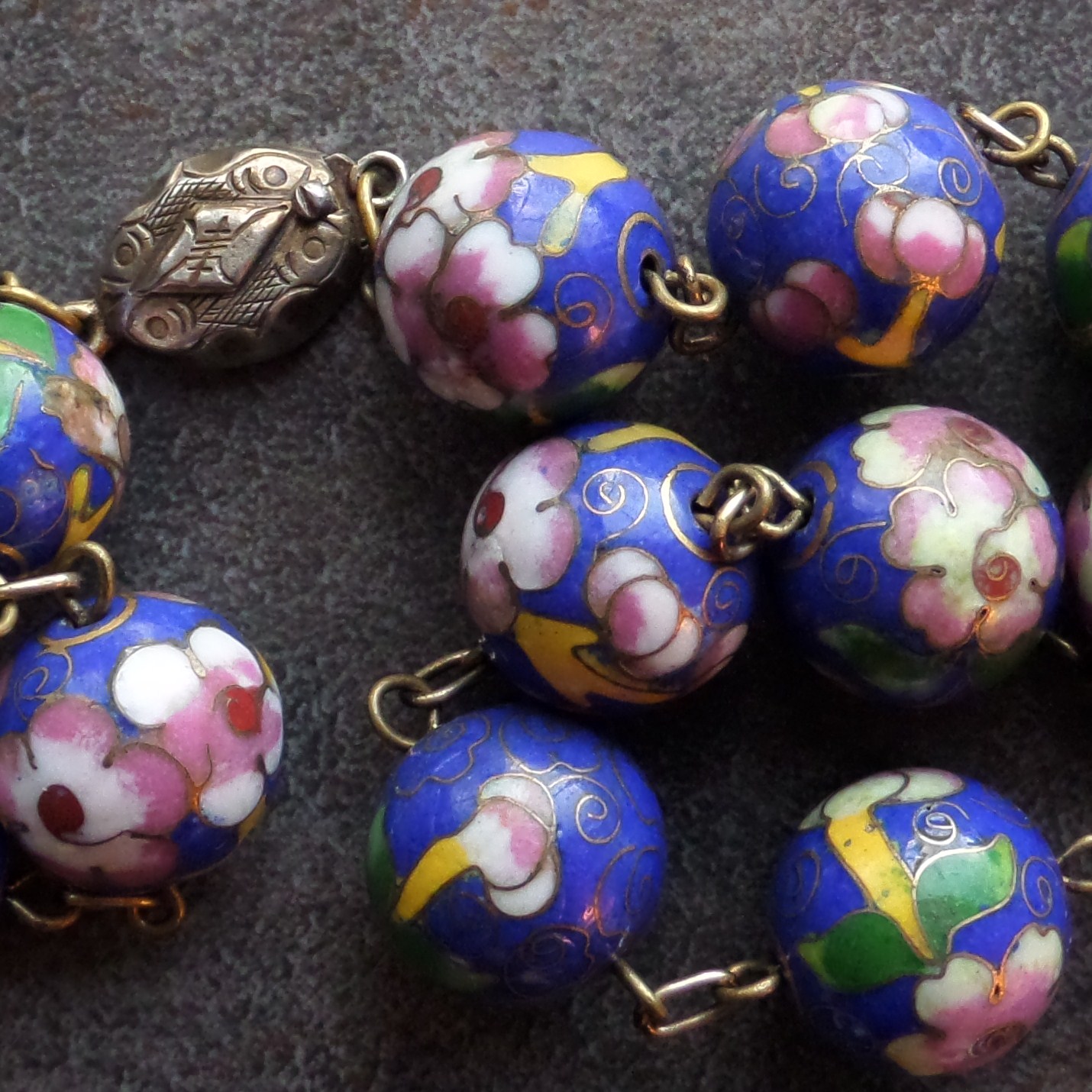 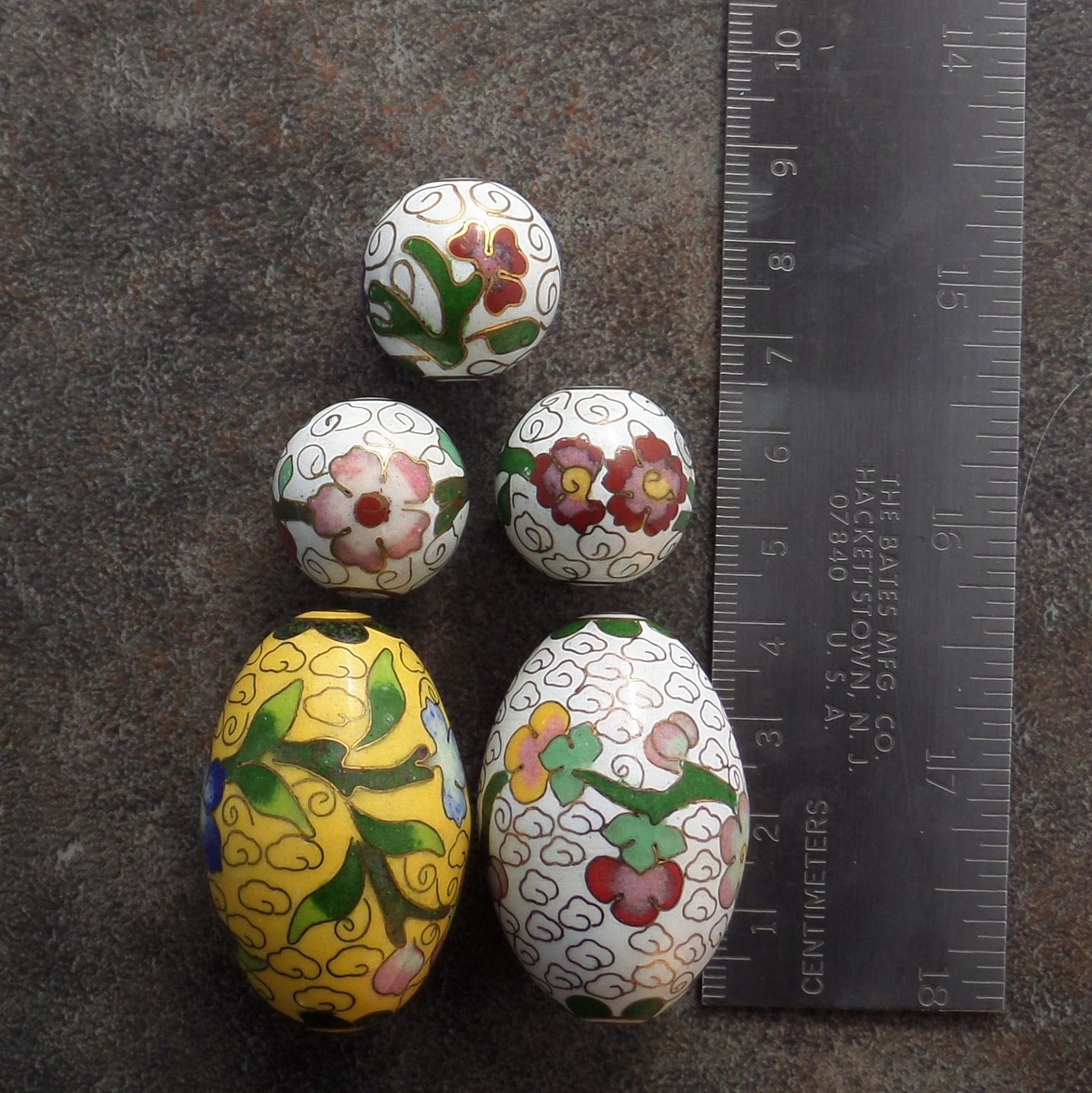 One possible explanation for this is that the JingFa style of cloud appears on cloisonne items made before 1956 – but the evidence for that so far is entirely lacking.  The more likely explanation seems to be older craftspersons or senior artists continuing to make cloisonné motifs in their usual manner, using tiny JingFa clouds right along with peaked clouds and spirals.  This Montreal Gazette article from 1973 describes how older craftspeople were recruited to restore traditional designs after products of the Cultural Revolution proved unappealing.  However, like the older cloud styles, eventually the 3-wire and 3-loop buds disappear, and only the JingFa bud appears.
Posted by beadiste at 1:44 PM No comments:

Earlier this year I purchased via online auction a Chinese cloisonne pendant or large disk bead with a phoenix on one side and a dragon on the other: 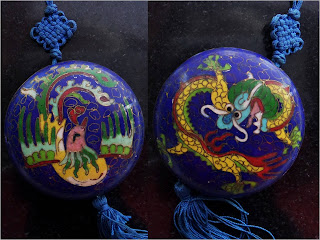 The pendant turned out to be damaged, so I returned it for a refund. It was re-sold, and the buyer removed its original cord, re-strung it into an attractive bead necklace, and successfully sold it again.  What caught my curiosity was that, in her online auction, she described the pendant to be from around 1910.  Discussion at beadcollector.net had persuaded me that this sort of pendant was vintage 1970s.  Which date was correct?  What were the clues that might enable one to date such an object?

Subsequently I harvested a number of these large disk beads from the Internet, either as purchases or images: 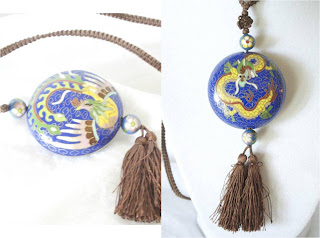 Similar, but smaller and thinner, beads show up on belts that seem to date from the 1930s:


Comparing the little phoenixes on the beads to this vintage vase, the more skilled of the two bead artists has done a rather amazing job of cramming so much lively detail onto a small curved surface.
Also for comparison, a small round pre-WWII dragon box not much bigger than the beads: 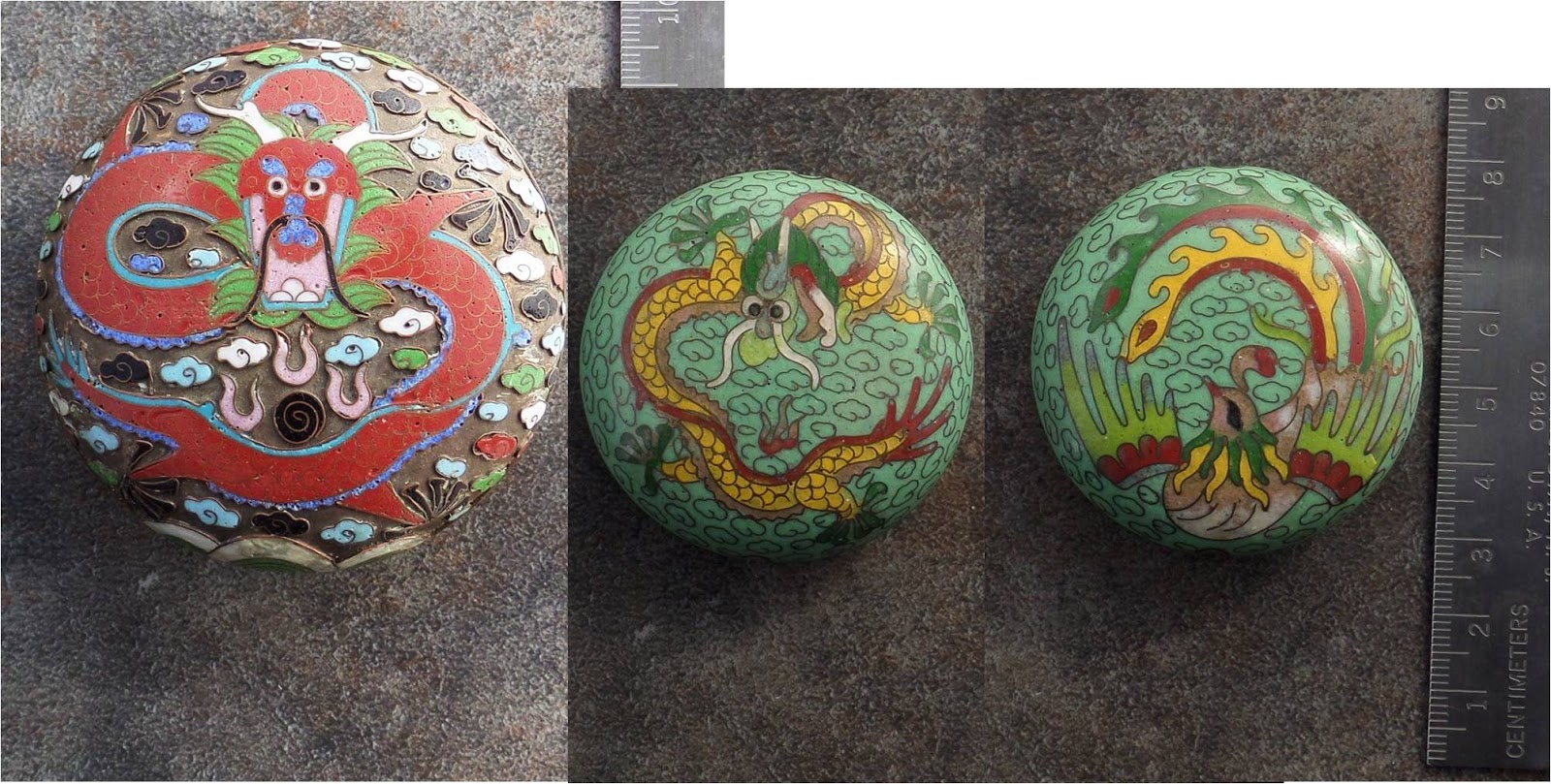 An oddity that turned up in my search is the way vendors described the creatures.  Dragons they understood immediately, but the phoenix apparently is not as easily recognizable as a bird and so wound up being called "serpents," "sea anemones," or "a fish."
The pose seems to be similar to that of a courting male pheasant.
In fact, the whole bird, from the almond-shaped eyes, small tail feathers sticking out from the streaming peacock-style feathers, rainbow-colored wings, topknot, and wattle can be seen as an artistic composite of various real birds - golden pheasants, Lady Amherst's pheasants (note the smaller feathers sticking out from the sides of the tail), peacocks of course, and one of our favorite dinners, the Red Jungle Fowl.   Standing depictions feature long, crane-like legs.

Wikipedia has more, of course, for those interested in the actual history of the iconography, including an explanation as to why male plumage wound up in a bird that is now connected with femininity. 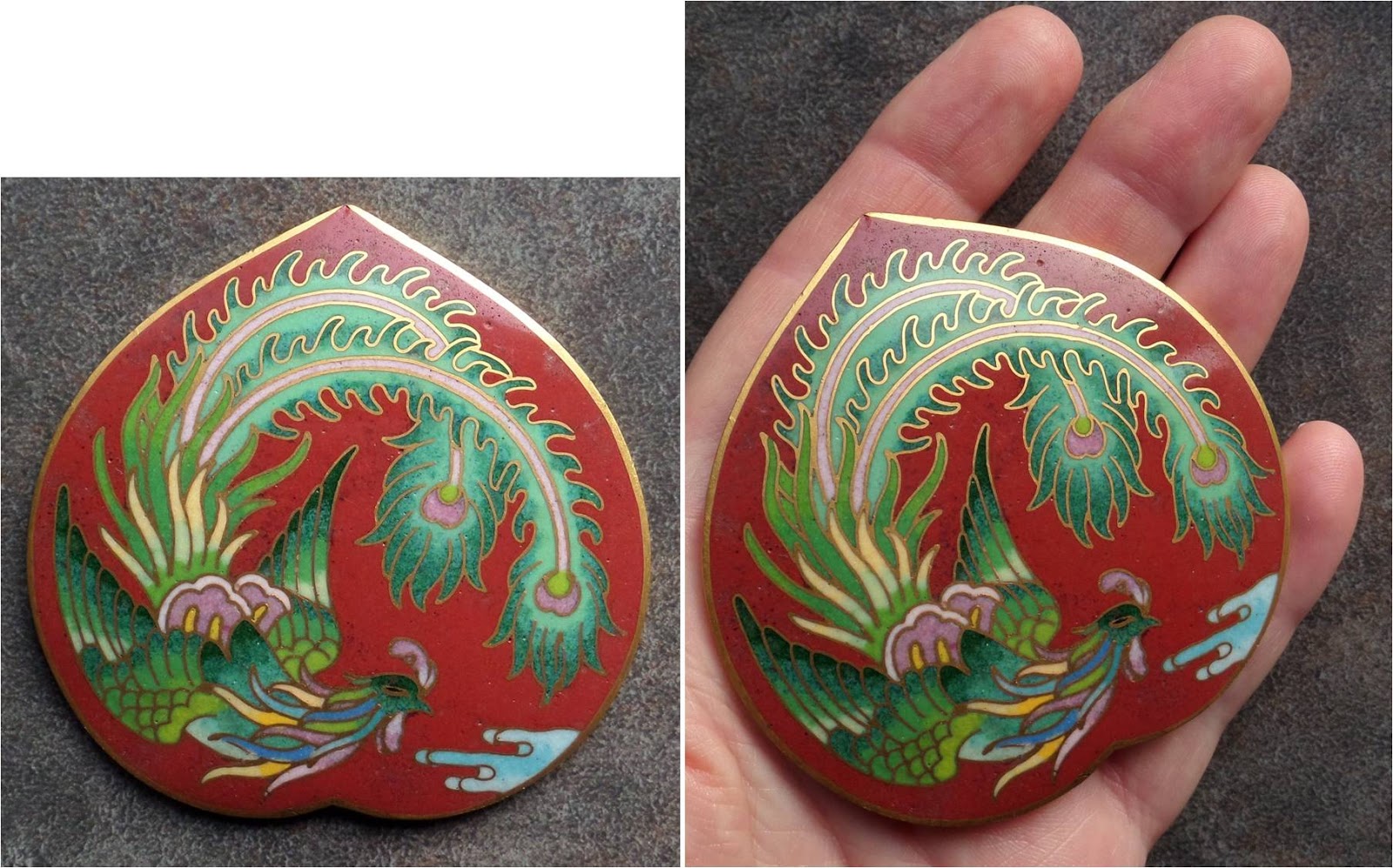 In a discussion at beadcollector.net, we wondered if it was possible to date a Chinese cloisonné necklace by the style of clasp.  Those who frequent online auction sites may have noticed a type of floral cloisonné clasp that some vendors imagine dates from the Deco era (roughly between World Wars I and II, or the 1920s-early 1940s).  I’ve termed this “The Lotus Clasp,” as that’s my best guess as to what the flower might be. 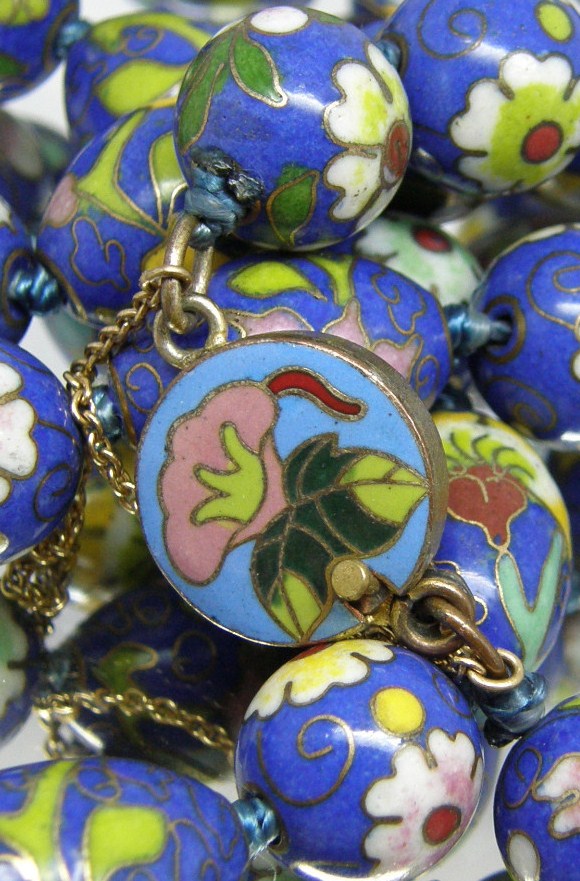 In this photo of beads in my collection, the green strand on the bottom is the earliest, with a claimed date of 1950s (“According to the daughter, this was purchased in Asia in the 50s”).  The seller of the white ovals necklace at the top stated that she had imported this and similar necklaces in 1981. The craftsmanship of this white necklace seems a bit more hurried and typical of mass production; hence I placed it at the top end of the sequence, although I do not know the dating of the other necklaces, or whether the Lotus Clasp continued to be used past the 1980s.

I also have a strand of small turquoise rounds and slender ovals, which appears similar to another necklace that was sold on eBay – my strand has what seems to be a vermeil filigree clasp, the eBay strand has a Lotus Clasp.  These beads are comparatively dainty – the rounds are only 8mm.  The eBay seller stated that a Chinese friend who travels to China to visit relatives purchased this necklace there in the 1960s.
Thus we have three accounts that seem to place this clasp within a late 50s – early 80s timeframe of about 25 years. 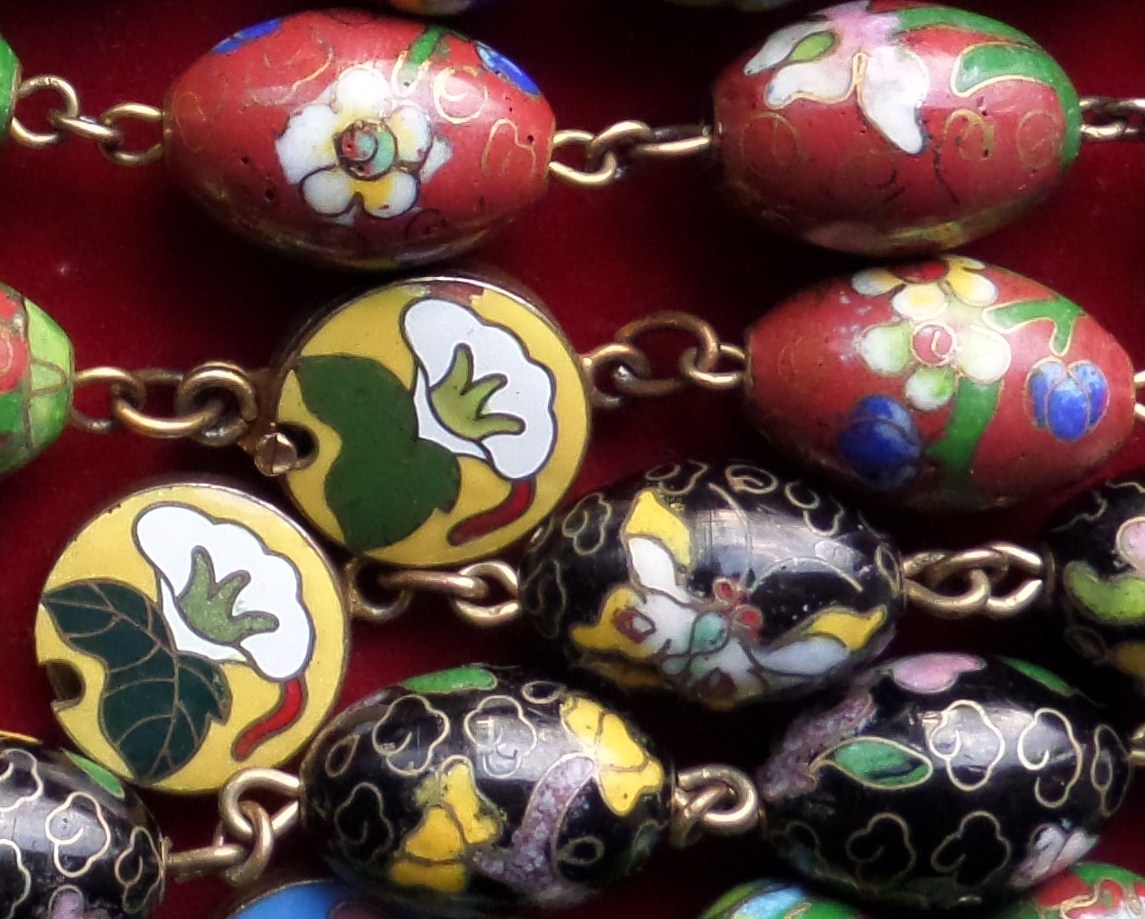 The Lotus Clasp is a machine-stamped design – the cloison wires are not hand-applied.  Examining the clasp with a 10X loupe, one can see that the enamel has been carefully applied in just the right amount (usually) to result in a shiny fire-polished glaze that requires no subsequent grinding and polishing.  There are no polishing artifacts such as parallel lines and matte areas that can be seen on wired cloisonné.

Comparing the three necklaces with a cloisonné clasp to those with the Lotus Clasp, some noticeable differences appear: 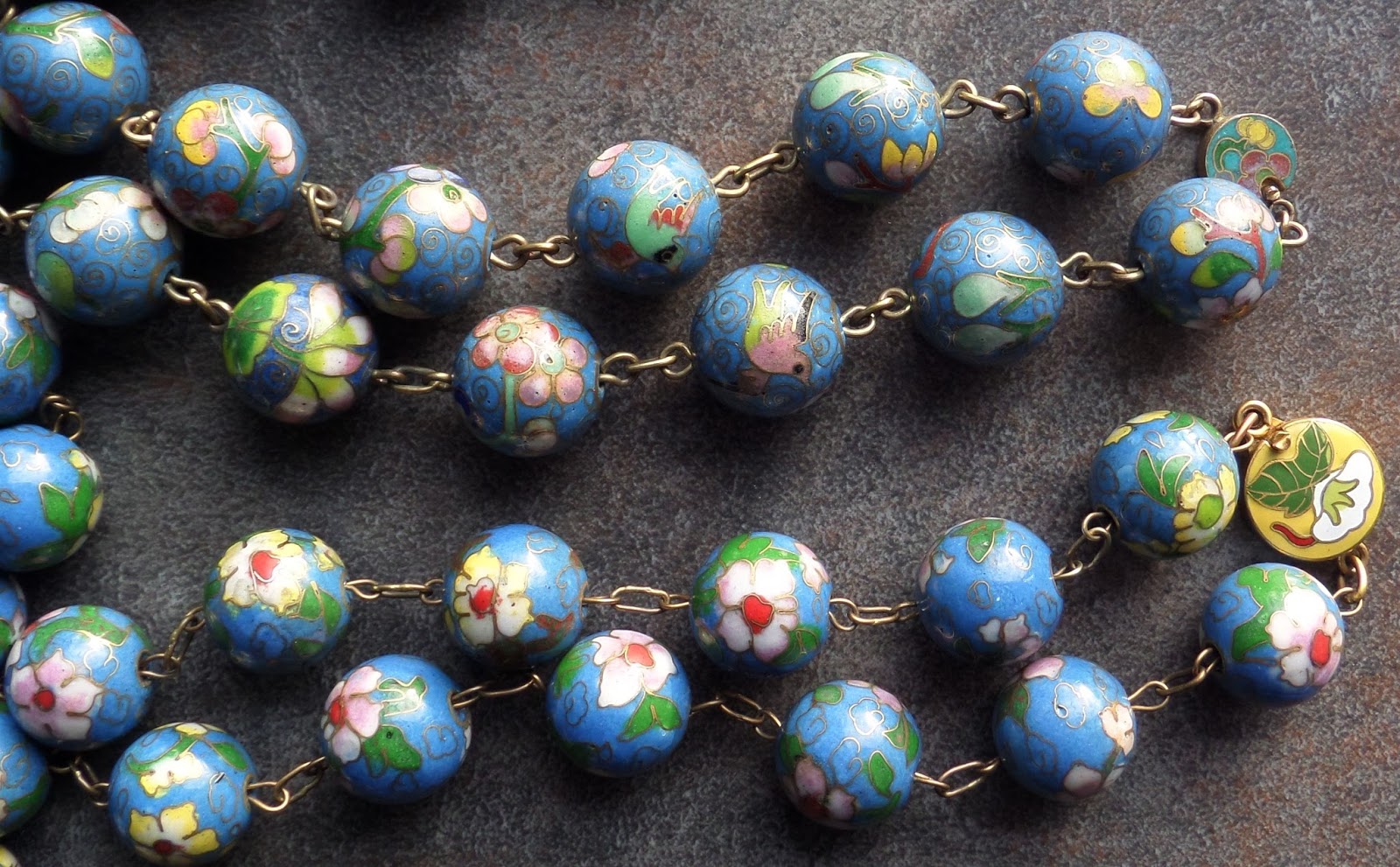 It seems unlikely that the Lotus Clasp pre-dates World War II; rather, it appears to be an artifact mainly of the 1960s and 70s.
It also appears with other cloisonné-type beads, such as those with cinnabar or stamped or twisted wire patterns. 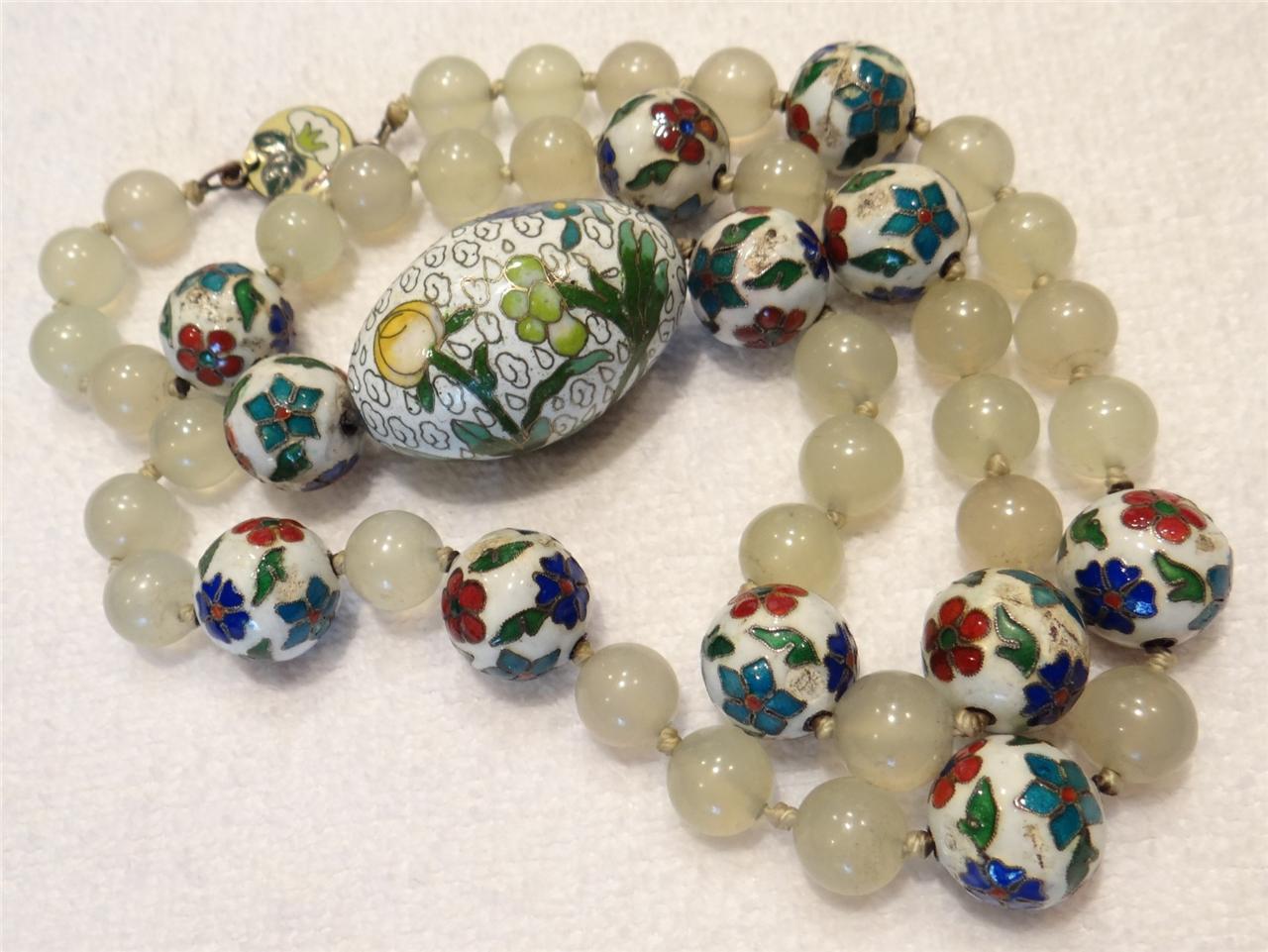 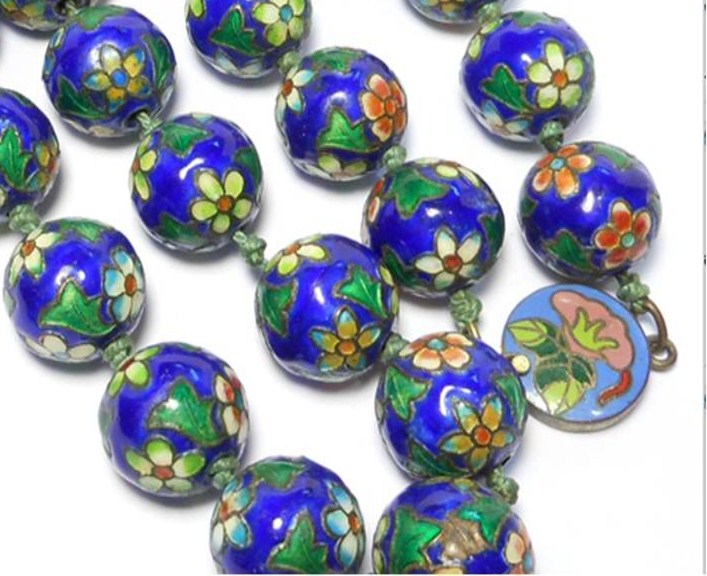 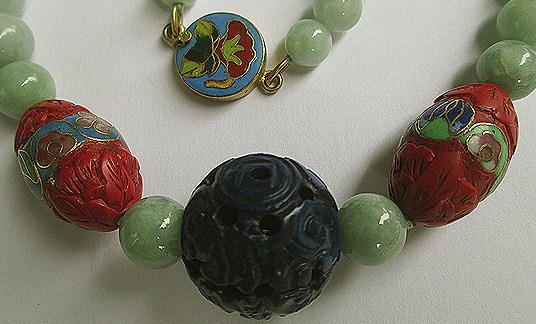 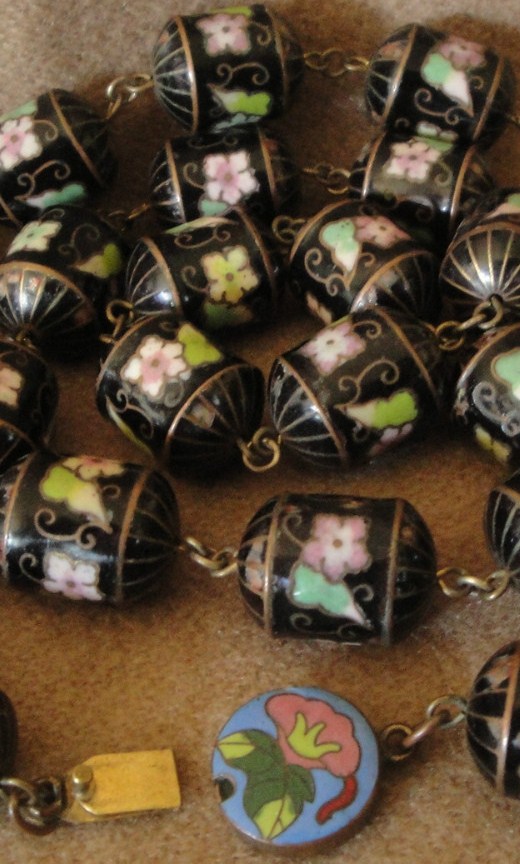 As to dating those necklaces with actual wired cloisonné clasps, the evidence is puzzling.  For example, the blue and light blue background enamels look identical to necklaces with the Lotus Clasp. Older artists? Artistry vs. mass production? Different workshops?

UPDATE: A bracelet with what looks like a cloisonne (i.e., hand-wired cloisons) version of the Lotus Clasp was sold recently on eBay.  Some pics, courtesy of the vendor, Vickysdesign917 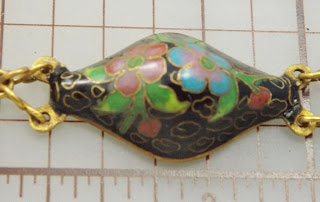 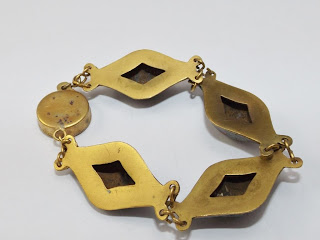 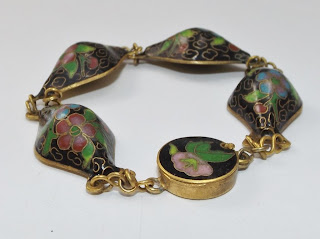 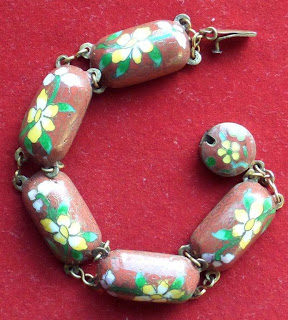 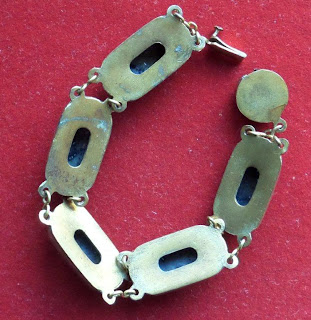 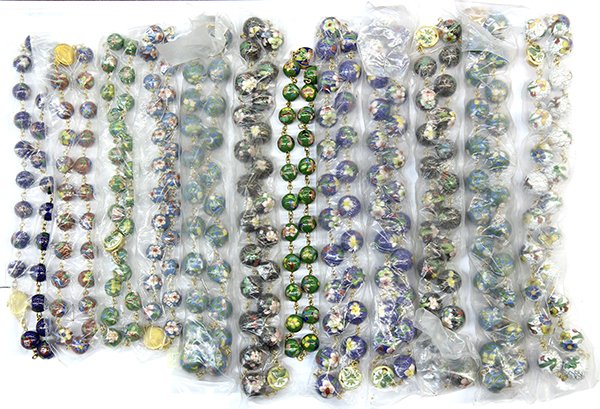