This exploration of pink background enamel in Chinese cloisonne began with a plate displaying auspicious symbols, then examined a variety of works from Dr. Edward Gerber's collection in a distinctive design featuring the Hundred Treasures.  While the overall pattern of most of the Gerber collection pieces resembled a pair of jars with a Jingyuantang 静远堂 signature, a pair of basins were in a quite different design scheme.  A correspondent who now owns these basins suggested that they are likely from the 19th century.
Another correspondent has a black basin in this design, and a blue one turned up in an online auction.  The owner of the black basin describes it as "decorated in the Buddhist 'Eight Treasures' (babao) pattern with 'five Blessing' (wufu) bats amidst the clouds and 'Longevity' (shou) medallions.  The bottom is rounded, so definitely meant to sit in a hole in one of those old commodes or wash stands." 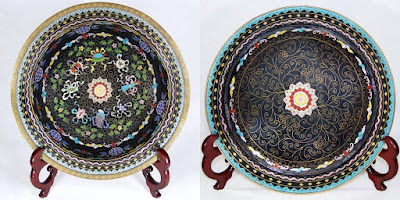 I did a photo comparison of the three basins, which shows differences in the small details that seems to demonstrate that the artists doing the wirework were copying from a master design, but not exactly.  For example, the pink basins feature an extra petal in the central medallion.  Modern cloisonne wires are glued together in sets of 8 to 12 and bent to precisely follow a printed copy of the design, so all versions are identical.  In contrast, older cloisonne craftsmen, such as Jin Shiquan, evidently worked directly in wire, likely over an underlying sketch, "drawing" with wire much as they might draw with an ink brush.  When making pairs, it seems likely to me that they might have simply bent two wires at the same time, thus matching up the motifs as they worked on each piece.  Thus the pieces in a design series might be quite similar, but they never display the exactitude of matching that modern cloisonne technicians achieve, because that wasn't an issue. The older artists doing the wirework might indeed have possessed the draftsmanship skills to draw the master design in the first place, so replicating motifs by eye alone would have been routine for them.  At any rate, these differences in the details might signify that these are not recent works from, say, the 1990s.

Another distinctive feature of the basins is their background diaper of kinky little Ming-style clouds (?).  I've only found two other examples of this exact diaper: a small bowl, and a set of stacked cylinder dishes featuring the Hundred Treasures motifs.  The bowl seems to have been done to imitate Ming style cloisonne.  The stacked dishes are similar to the pink stacked dishes formerly owned by Dr. Gerber and by Audrey Meadows; however, where the pink dishes feature interiors of plain green enamel, the blue dishes show this little kinky cloud motif. 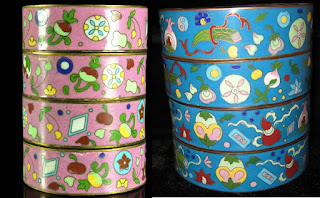 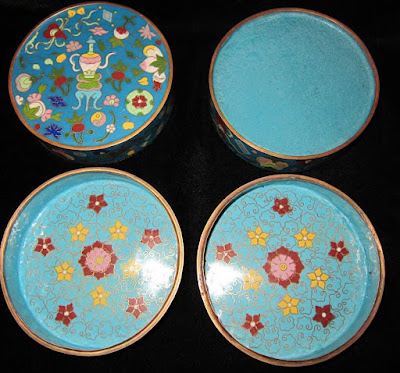 The Hundred Treasures motifs of the cloisonne vases and jars seem to be something that was fashionable in porcelain as well.  This white porcelain jar, sold at auction in 2012, shows a startling similarity to the pink, blue, and green cloisonne versions.  The "CHINA" mark splashed on the bottom indicates that it was applied to comply with United States export marking requirements of the 1890 McKinley Tariff Act, and the paper label might indicate that it was exported after 1921, when the tariff act was amended to require the words "Made In" as well as the name of the country of origin. 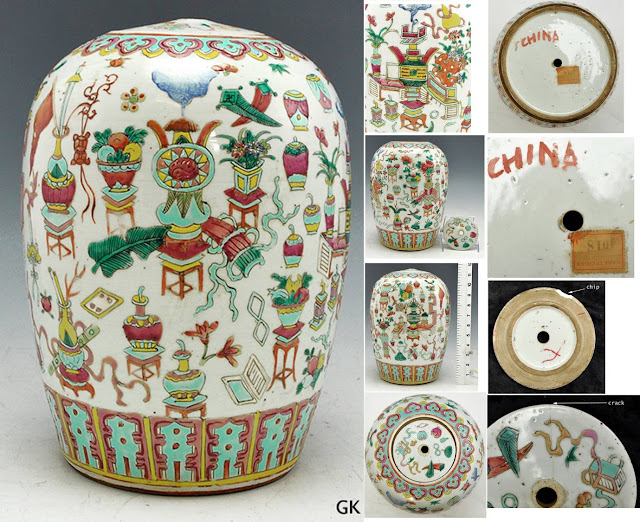 Examples of Hundred Treasures rouleau vases can be found from at least the 1700s, mostly in porcelain. 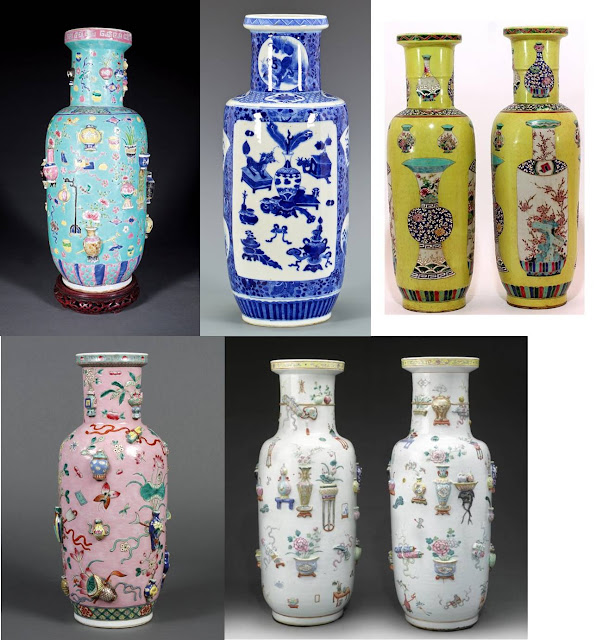 A comparison of a porcelain vase and cloisonne designs: 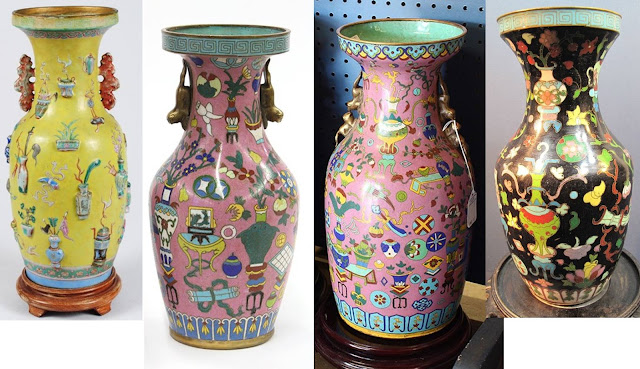 What to make of this puzzling evidence? Are the pink basins, perhaps like the pink Dragon's Gate plate that started this series of posts, indeed from around the late-19th century to 1912, (when the Qing dynasty ended)? Their traditional motifs, careful craftsmanship, and likely use in furniture seem made to appeal to wealthy Chinese.  The little bowl and stacked blue dishes sharing that kinky cloud pattern with the basins are quite nicely made as well.

The "Hundred Treasures" pieces, however, display a jazzier overall design that might well have appealed both to foreigners and to Chinese seeking to be trendy and modern.  Those spiked finials on the jars seem very Deco, and the porcelain jar was made into a lamp, something that was very fashionable in the 1920-30s as electricity in homes became more widespread.  So could these be works from the Republic era, dating from around World War I to perhaps the early 1930s?

What do you think?  I still wonder why so many of the Gerber collection pieces are still in their original pairs.

UPDATE: Another black basin turned up in a search of online auctions.  So that's a total of 5 basins so far, all sharing the same design and all in very nice condition. 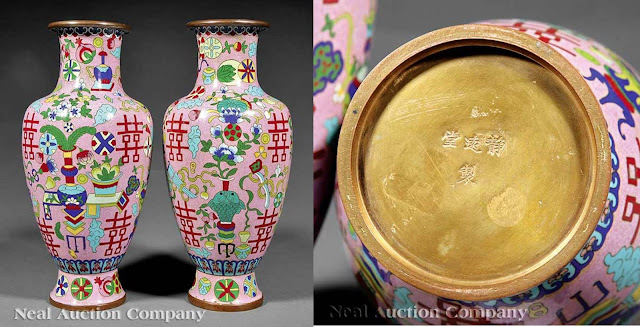 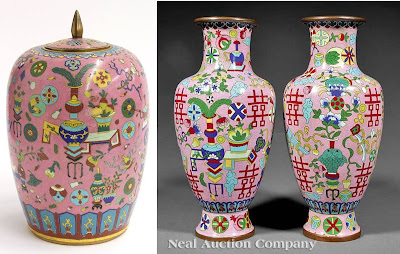 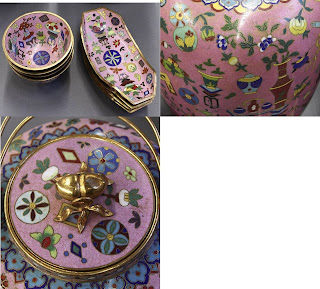 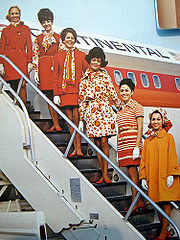 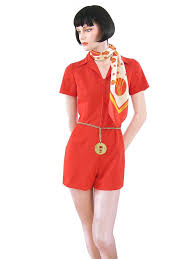 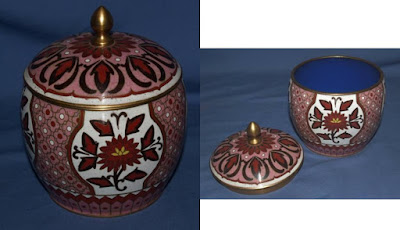 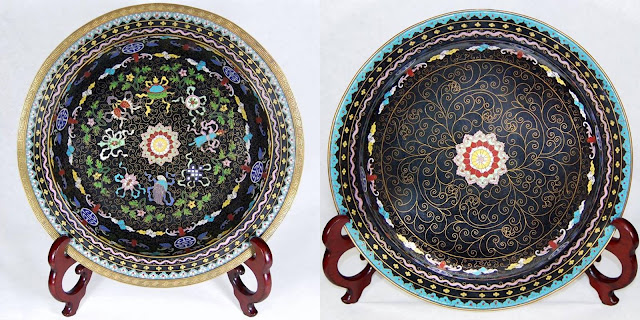 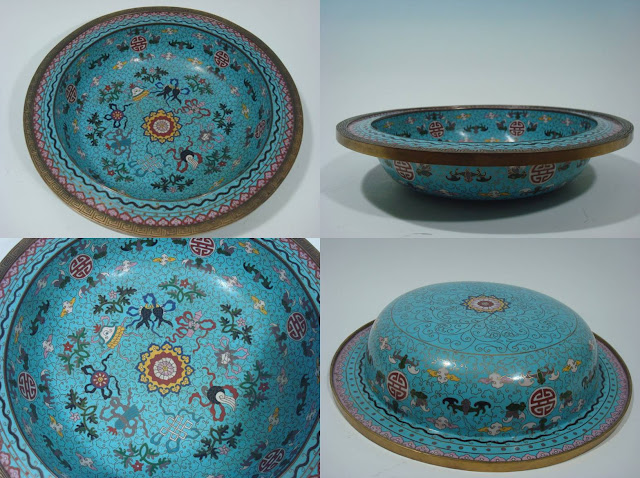