A Chinese Cloisonne Necklace from 1979 with a Morning Glory Clasp

Way back in 2013, when I was trying to sift evidence for dating Chinese cloisonne beads, I wrote a blog post about what I subsequently learned was a morning glory motif in a champleve clasp.

A recent eBay purchase turned out to be a rare example of a cloisonne necklace of 15mm beads that could most probably be dated right down to the month and year of purchase. 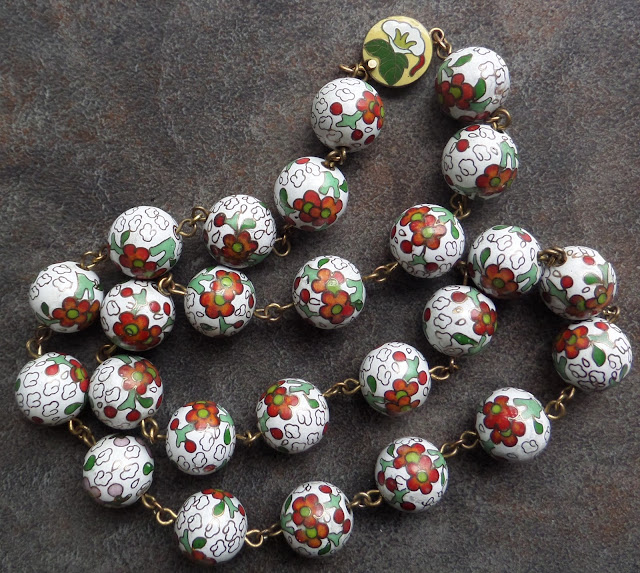 The seller kindly made the effort to go through her mother’s travel diaries, and discovered this in connection with the necklace:

“My mom flew from California to Hong Kong on September 12, 1979. Several days later she and her friend joined a tour group and they boarded a train to Canton. During her stay in Canton they also visited Foshan. While in Canton my mother mentions buying some ‘lovely cloisonné bracelets.’

Next the group boarded a train to Shanghai and lastly they flew to Beijing. My mother spent 2 weeks in China.”

Here is a fascinating online account of another adventurous woman’s trip to China in the late 1970s:

How much did the necklace cost back in 1979?  Another morning glory clasp necklace of smaller 12mm beads, still unused in its original box, was purchased in the early 1980s by a man backpacking in China.  If the price tag is indeed in dollars, $52 in 1983 would be the equivalent of $150 today. 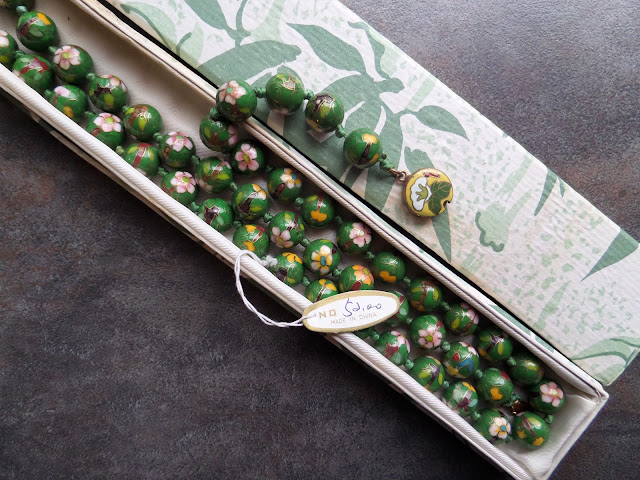 Our 1979 piece is a pretty necklace that has been well cared for and still has its original polish.  And it displays an insight into the working method and skill set of the craftsperson who made the beads as well as the origin of the design.

Initially the collectivized Beijing Enamel Factory was staffed by older masters and craftsmen still surviving from the war-torn 1930s and 40s.  These men had spent decades learning their cloisonne skills – Jin Shiquan, for example, was apprenticed at age 11.  They could draw, from scratch with thin copper wires and tweezers, designs that most of us would have great difficulty copying in pen and ink.  A traditional pattern is the plum blossom branch, featured in the necklace under discussion here.  It can be seen in these early 1930s photos taken by Hedda Morisson of a Chinese cloisonne workshop.

What I find interesting is the method of wiring the design in the 1979 beads.  It features the traditional motif of a blossom branch, depicted vertically as if stemming from the hole of the bead and then dividing into two twigs.  A few clouds are added alongside to form a background design that prevents the enamel from clumping up.  Then, instead of rolling the bead horizontally to add another branch on the opposite side, the bead is flipped vertically and the original design sequence repeated.  One can see this from the reversed direction of the clouds in the background. One side of the bead is thus “upside down” to the other. 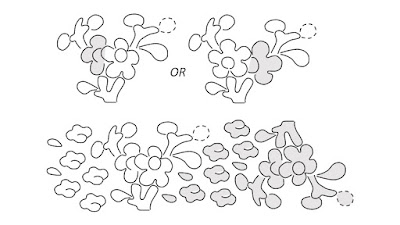 This design of two blossom branches shows up in other morning glory clasp necklaces:

By way of contrast, a necklace of oval beads reported as imported in 1981 by the eBay seller, Joannie’s House of Treasures, shows a blossom branch design of a single branch that starts near the hole and then wraps horizontally around the bead as a sort of belt.

By the time the oval 1981 beads were decorated, a newer style of working flowers was spreading among the wireworkers, wherein the center circle and petals were worked in one continuous strand of wire.  Initially the centers of the flowers were tidy circles, as in the past.  However – presumably as unskilled workers had to be hired during the cloisonne export boom of the 1980s and 90s -- flower centers often became more and more irregular and sloppy blobs.

The beads in the 1979 necklace are evidently the work of an older craftsman – or at least someone working under his supervision – as the flower centers are constructed as separated tiny circles and half-circles, as can be seen in cloisonne works from the 1930s and before.  The smaller 13mm beads shown in the blog post about the “Old Man” workshop demonstrate a similar pattern of the split blossom branch, albeit with more intricately and finely worked branches, buds in the older fashion of a circle + two half circles, no leaves, and tiny spiral floral centers instead of simple circles. Each bead in the circa 1930s necklace was rotated horizontally to create a long branch across the “front” and a small branch on the “back,” with no filler of small clouds.  I wonder if this demonstrates the origin of the pattern used in our 1979 necklace?

My blog post previous to this one contains a link to a PDF discussing how cloisonne beads were manufactured circa the 1970s and the evolution of the blossom branch design.  It includes an example of a necklace like our 1979 piece --  15mm beads strung with metal links and a morning glory clasp -- demonstrating an older worker’s conception and mastery of the blossom branch design, this time as a belt around the bead, similar to the 1981 oval beads necklace albeit more finely worked.