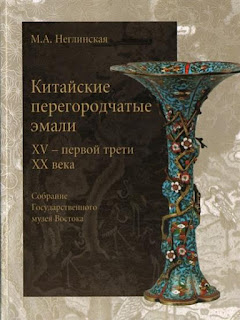 What clues might tell these workshops apart?  Do stylistic variations perhaps trace the career of particular artists, such as Laotianli, from when they started out as a young artists in someone else's shop to when they founded their own ateliers?

A particularly interesting plate is described in M. Neglinskaya's book.  It features the actual signatures, exactly copied in cloisonne wires, of four Russian diplomats, wealthy merchants or bankers, and a medallion with the Cyrillic initials CE and CA and "Peking 1888."  The initials are believed to refer to the Startseva (Elders) family, perhaps Alex Elders and his daughter Elizabeth.  The cloisonne workmanship is superb.

Also featured in the Neglinskaya book is a large circular cloisonne tray with a dramatic dragon in frontal pose.
A large plate from an online auction a few years ago features a dragon and decorative border similar to the two pieces in the Neglinskaya book.  The likelihood of the border design being the work of two different artists is remote, thus it seems reasonable that the plate may also date from around 1888. 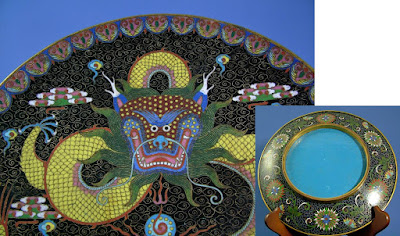 Comparing the dragon plate to the Neglinskaya tray, we observe a difference between the curled and spiky whiskers surrounding the lips, but otherwise the dragons are strikingly similar: 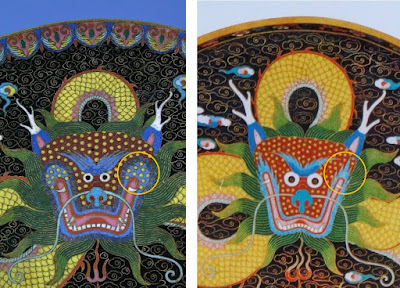 Two large 10" bowls display a dragon very similar to that in the plate, although with a ruyi border instead of the border of tiny leaf pairs:
Two other bowls similar to the 10" examples: 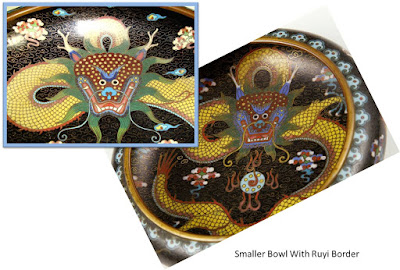 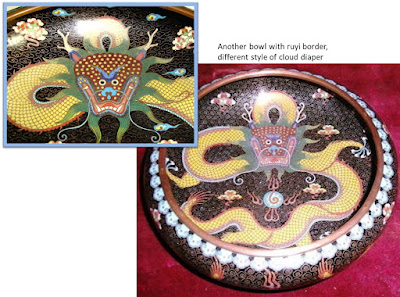 An 8" pedestal dish, or tazza, featuring a similar dragon with spiky whiskers: 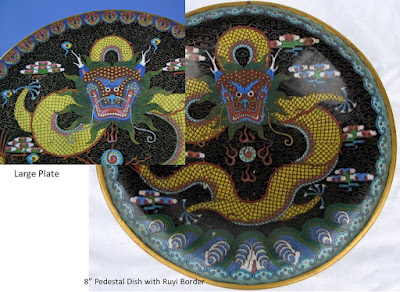 A comparison of all the dragons listed above:

And for further comparison, dragon designs on works with engraved LaoTianLi signatures: 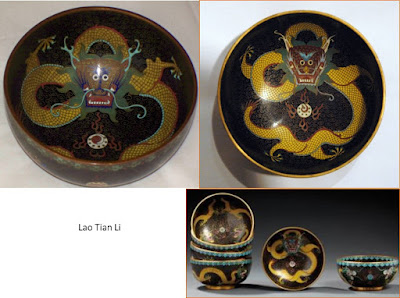 How to sort through all this puzzling evidence? The Dexingcheng atelier claimed to have been established around 1860, Yangtienli in 1874.

Did Laotianli learn this distinctive style of dragon from working in shops like these?   What other workshops continued to use this dragon design, perhaps into the 1930s?
Posted by beadiste at 12:34 PM