Puzzling Evidence - What About Cloisonne Beads from Taiwan? (Part 1)

After some time spent watching online auction sales for cloisonné, I noticed a number of stylistic trends in the offerings, one of which is so distinctive as to really stand out from the pack.  Some of the tell-tale features include:


Pieces found in online auctions sometimes have an intact trademark stamp – a circle enclosing a capital letter “K”, accompanied by “Made in Taiwan” or “Made in Republic of China” or a string of Chinese characters either alongside or as a surrounding circle.

On page 73 of Arthur and Grace Chu’s book Oriental Cloisonné and Other Enamels, copyright 1975, this photo and caption appear:
A distinctive bracelet of chain-linked rectangles seems to share a similar style:


One eBay vendor described one of these bangles as “German modernist from the 1950s,” but a Google images search on Scholtz & Lammel (German cloisonne design from the 1950s-60s) reveals only a very slight resemblance between the German bracelets and those from Taiwan – i.e., the German logo is an “S” inside a circle, and the bracelets are often made in linked cloisonné rectangles.

An Internet search revealed a very similar trademark registered in 1978 for “Kloison K” by Robert Kuo in Beverly Hills, California.

The logo also appears in other forms (note the similarity to the circle "K" with Chinese characters on the bangles at the start of this post): 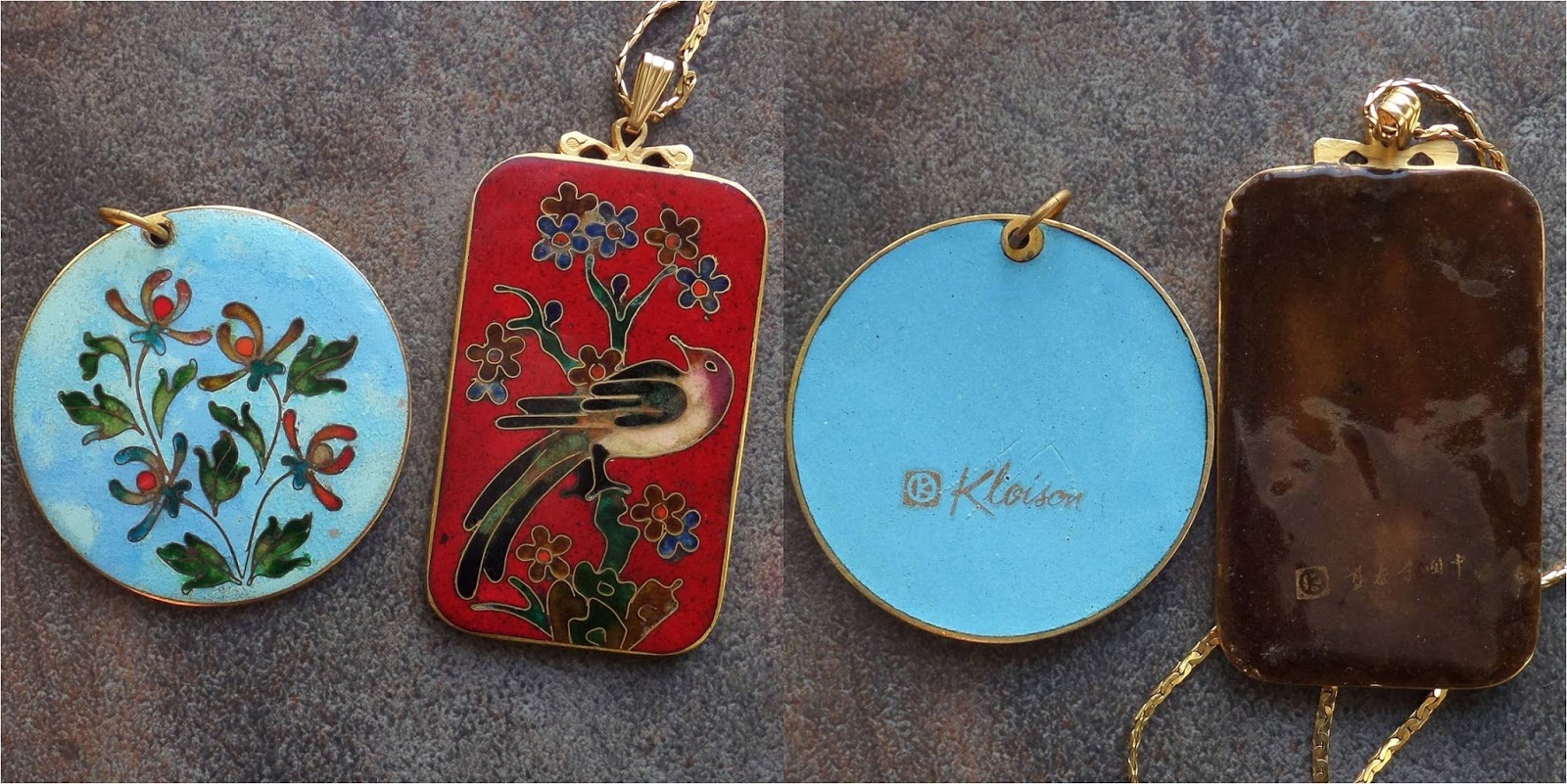 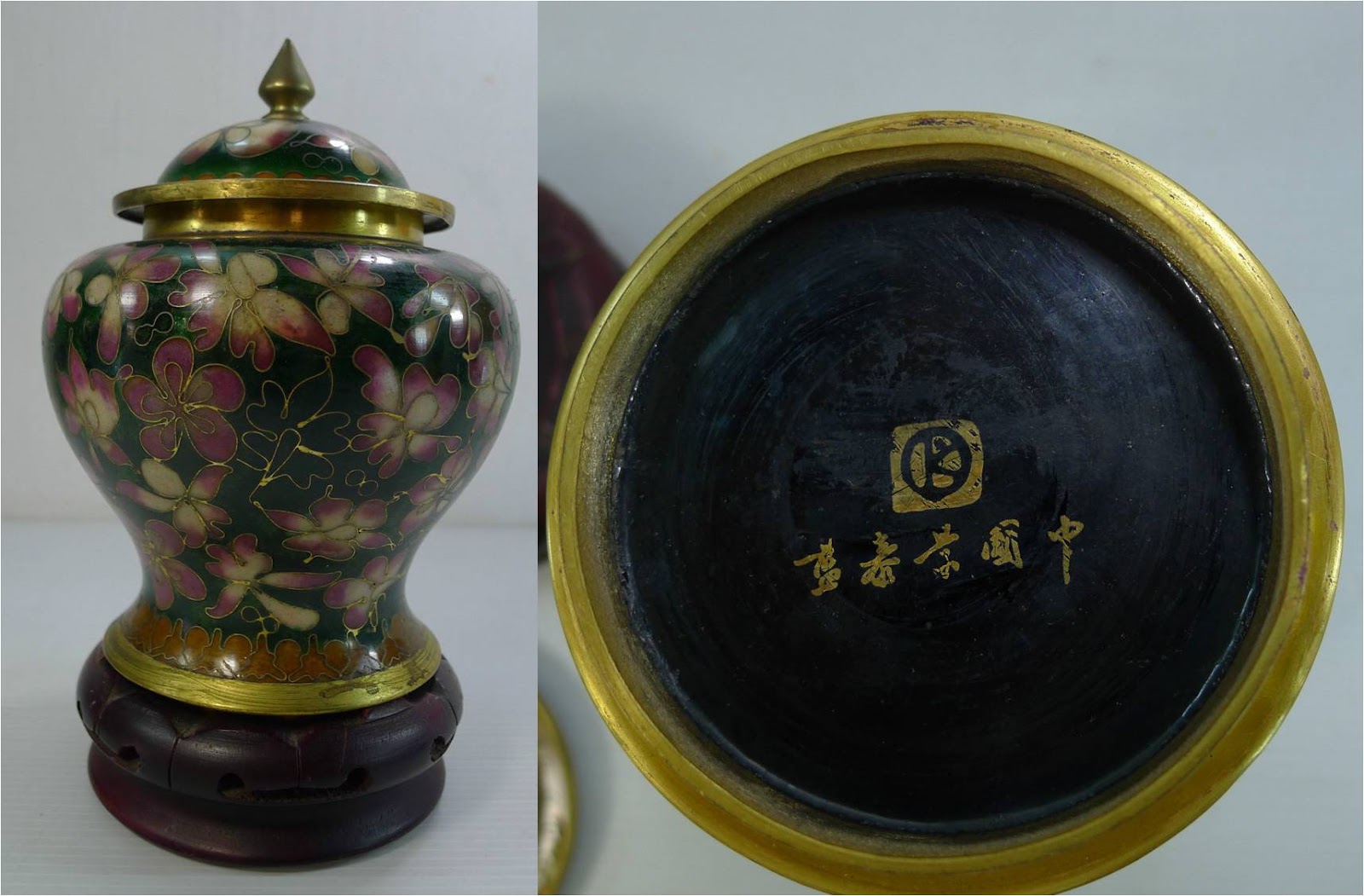 Following the bread crumbs, I discovered Robert Kuo’s work.  From his website biography:

Born in Beijing, he moved with his family to Taiwan in 1947. Kuo grew up in an artistic environment. His father, an art professor and Chinese watercolor painter, started a cloisonne atelier where Robert became an apprentice at age fifteen. Although he never engaged in formal art studies, Kuo gained technical expertise and learned about decorative tradition from "hands on" training. As he mastered each of the steps involved in cloisonne from preparing copper bases to enameling and firing the kilns, Kuo absorbed all the basics that were to serve him throughout his artistic career.
While pursuing his studies in Taipei, Kuo assisted his father in the creation of a cloisonne studio. A visit to the United States persuaded the young artist/entrepreneur that the American environment would benefit him, both personally and professionally. In 1973, he immigrated to the United States and opened a studio for cloisonne in Beverly Hills. Kuo cultivated a clientele that appreciated the way he "opened up" Chinese tradition. Utilizing the influences of Art Noueau and Art Deco, Kuo introduced new shapes, finishes, and objects to cloisonne.

So what does this have to do with beads? 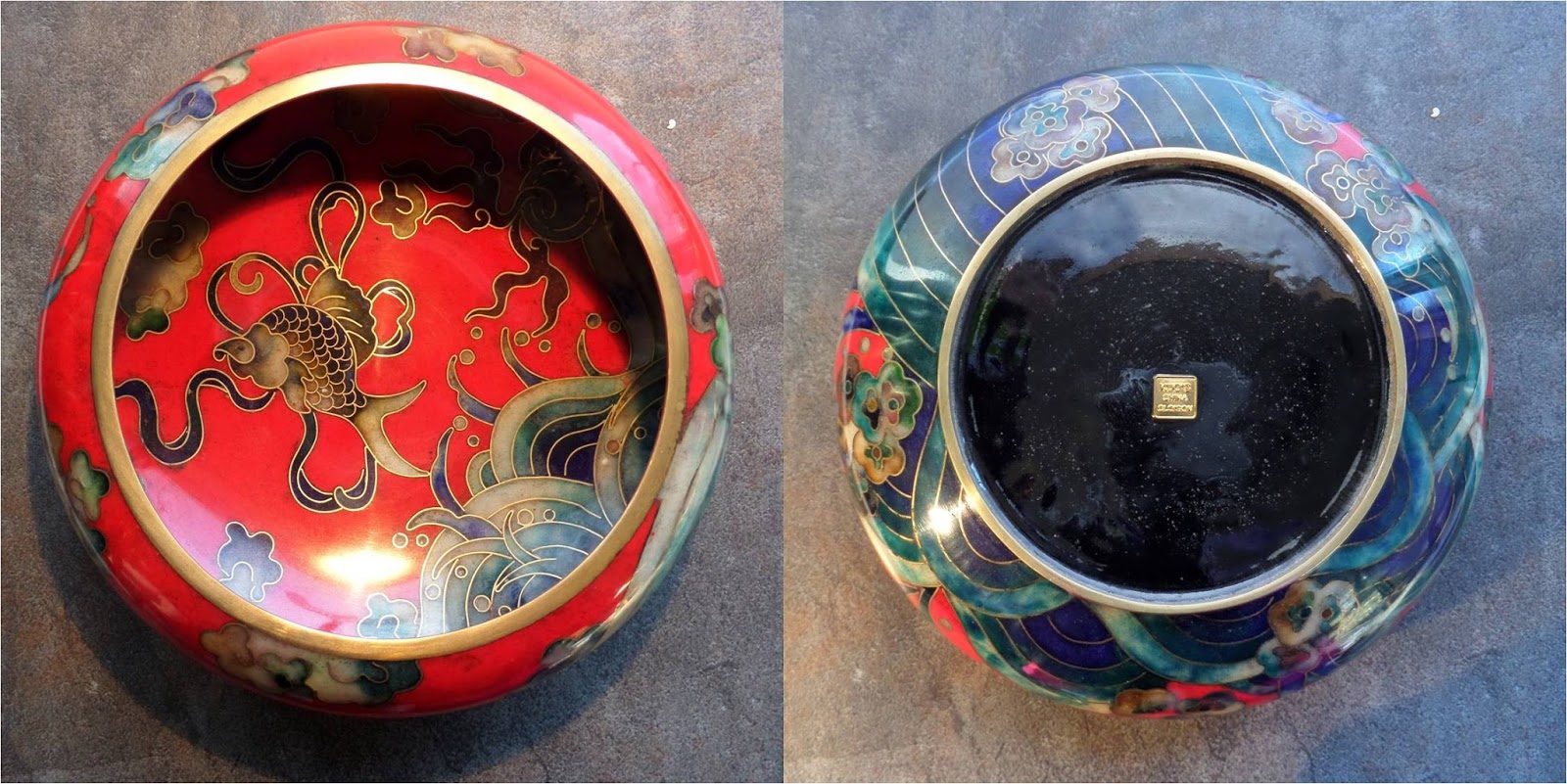 Kuo Ming-chiao has dedicated himself to the creation of
cloisonne art for 30 years. He began his artistic career, however, as
a painter, and his works were internationally exhibited and acclaimed
as masterpieces of Chinese painting. He received many awards,
including those presented in Vietnam, Australia and the United
States.
His painting career came to an abrupt and unexpected halt in a
moment's inspiration which changed his artistic path. While
travelling in Europe to attend an exhibition of his paintings in
1960, he had what he described as an "electrifying experience." In a
marketplace near Cologne, West Germany, he was overwhelmed by the
splendor of the cloisonne art on display. He abandoned his plans to
continue his continental tour, choosing instead to remain in the
small German town to learn the art of cloisonne.
Posted by beadiste at 4:43 PM